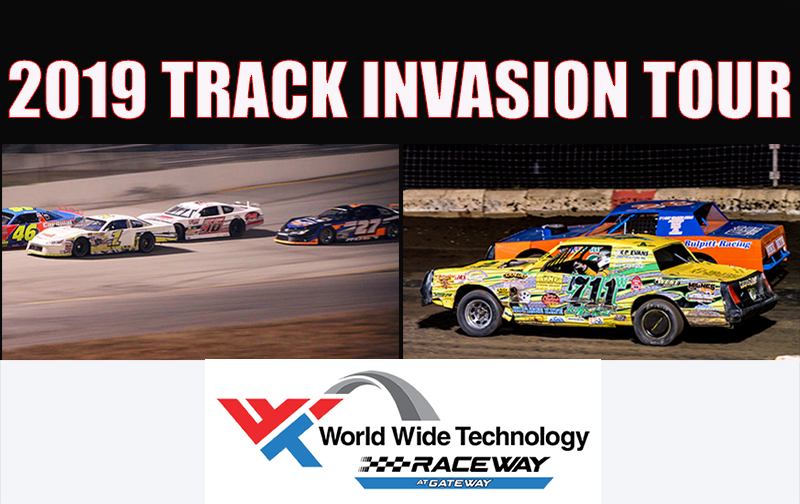 The promotion traditionally launches each year at the famed Chili Bowl in Tulsa, Oklahoma. This year, WWT Raceway has added dates at Lebanon I-44 Speedway in Lebanon, Missouri, and Jacksonville Speedway in Jacksonville, Illinois. I-44 Speedway will host a theme night in conjunction with the Roper Classic Pro Late Model race on June 1 and again on its July 3 Salute to 75 Larry Phillips tribute. The WWT Raceway Track Invasion team will participate in Jacksonville’s Midget series events on  May 31 and August 4.

Each Track Invasion theme night will feature the WWT Raceway pace car, a racing show car, a WWT Raceway Pace Car, the Gateway Girls Street Team, a prize wheel, special giveaways to the first 200 fans through the gates and a variety of coupons and exclusive offers for upcoming events.

“Our efforts of aggressively working with regional shorts tracks have been very successful in our seven seasons,” said Chris Blair, WWT Raceway Executive Vice President and General Manager. “We love short track racing and there’s a big portion of our staff that, when we aren’t racing here, can be found at a local track with our friends and families. For us to embark on our Track Invasion Tour isn’t like adding additional work to our schedule, we do it because we want to be there and would probably attend anyhow.”

I-44 Speedway is a 3/8-mile, high-banked asphalt oval just off Interstate 44. Historic Route 66 runs adjacent to the property. The track, which was built in 1982,  is a member of the NASCAR Home Tracks program and was home to many of NASCAR’s legends through the years. Larry Phillips won three of his five NASCAR National titles while racing at I-44 Speedway.

Jacksonville Speedway has worked closely with World Wide Technology Raceway for many seasons. Jacksonville Speedway is a quarter-mile dirt oval that hosts numerous regional and national series throughout the year. The track is located approximately 30 miles West of Springfield, Illinois, and is becoming one of the most popular tracks in the Midwest, thanks to its hard-working and creative racing community that supports the venue.

“Ken Dobson at Jacksonville and the Willard family at I-44 Speedway are tremendous supporters of what we are doing at WWT Raceway and we are fans of the work that they are doing for the racing community,” Blair added. “We will be activating both a NASCAR and INDYCAR-themed night at each of their venues in conjunction with Illinois South Tourism to showcase that there are great things to see and do in the area surrounding WWT Raceway to make the weekend racing road trip concept even better. We also will be working with other tracks a little closer to home on similar programs and we currently are in conversation with tracks in Wisconsin, Indiana and Iowa to expand our reach.”