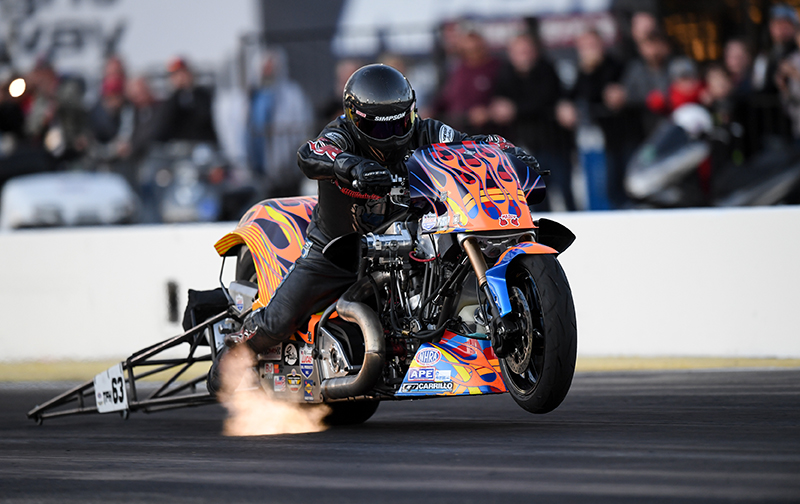 November 11, 2020, St. Louis Region – One of the most exciting classes in professional drag racing is coming to World Wide Technology Raceway in 2021. The NHRA Top Fuel Harley Series has been added to WWTR’s annual NHRA Camping World Drag Racing Series national event, scheduled for September 24-26, 2021. The two-wheel Harley-Davidson-powered racers burn nitromethane – similar to Top Fuel Dragsters and Funny Cars – and easily reach speeds in excess of 230 miles per hour. This marks the first time in more than a decade that Top Fuel Harley will race as a class in the St. Louis region and the first time as an NHRA-sanctioned division.

At 17 Camping World Drag Racing Series national events, professional teams will run three qualifying sessions over two days, Friday and Saturday, with final eliminations on Sunday. At five events, pro teams will run two qualifying sessions on Saturday with final eliminations on Sunday. This quick-draw format, which was utilized as NHRA first returned to racing in July 2020, provides racing excitement where every run matters, and allows economic balance for all stakeholders in current times. NHRA expects to return to the customary four qualifying runs in the future.

The event schedule and venue for an additional TBD event on June 18-20 will be released at a future date.

“We can’t say enough to thank the loyal NHRA fans who have stuck with us during the trying times of the 2020 season,” said NHRA President Glen Cromwell. “We are grateful to you. All of us at the NHRA look forward to a full season of drag racing in 2021. Thank you to our fans, racers, and partners for your continued support and cooperation.”

The 2021 NHRA Camping World Drag Racing Series begins March 11-14 with the 52nd annual AMALIE Motor Oil NHRA Gatornationals at Gainesville Raceway and concludes Nov. 11-14 with the Auto Club NHRA Finals in Pomona. NHRA will celebrate its 70th anniversary with special treats and features throughout the season.

Teams in Top Fuel and Funny Car will compete at every 2021 NHRA Camping World Drag Racing Series event. Pro Stock, which celebrated its 50th year in 2020, will race at 18 events in 2021, returning to several venues, including Houston, Topeka, and Epping.

The Pro Stock Motorcycle class will compete at 16 races next season, starting with its traditional opener in Gainesville and including races at Pomona and Las Vegas in April.

The NHRA Top Fuel Harley Series will race at 10 events in 2021 (including WWTR), while the SAMTech.edu Factory Stock Showdown Series is slotted for eight races. All three series will open 2021 in Gainesville. The Mountain Motor Pro Stock class will have a six-race exhibition schedule during the 2021 season, starting June 4-6 in Richmond.

World Wide Technology Raceway is the home of INDYCAR, NASCAR and NHRA racing in the St. Louis region. Located just five minutes from downtown St. Louis and covering more than 600 acres, WWTR is the largest outdoor entertainment facility in the area. WWTR’s facilities include a 1/4-mile drag strip, 1.25-mile superspeedway, recently-expanded 2.0-mile road course, a state-of-the-art karting facility, a 14-acre, multi-purpose dirt off-road venue and the Gateway Drive-In Theater at World Wide Technology Raceway (a drive-in entertainment venue able to accommodate 3,000 cars). WWTR acquired Gateway National Golf Links, adjacent to the speedway property, in 2019. WWTR was the recipient of the 2017 Outstanding Facility of the Year Award from the Race Track Business Conference and the 2017 Spirit of St. Louis Award from the St. Louis Attractions Association. In 2018, owner and CEO Curtis Francois received the Innovator Award from the St. Louis Convention & Visitors Commission in recognition of his work for restoring World Wide Technology Raceway (known then as Gateway Motorsports Park) to prominence. In 2020, WWTR received the Track Award at the annual NASCAR Drive for Diversity Awards.