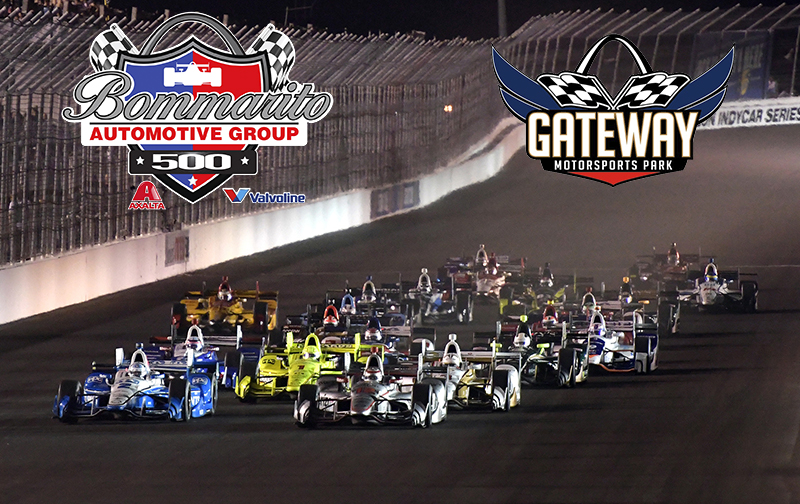 “The marketing partnership between Gateway Motorsports Park and the Bommarito Automotive Group has made a big impact on our efforts of showcasing professional motorsports in the St. Louis region,” said Gateway Motorsports Park owner and CEO Curtis Francois. “The Bommarito team and their partners have done a great job in coordinating their activation programs surrounding the event. The results have garnered the respect of the entire INDYCAR industry.

“We have been fortunate to find a local sponsor who shares our vision,” Francois added.

The Bommarito Automotive Group 500 event has enabled sponsor John Bommarito to actively engage partners Axalta and Valvoline with his 20 new car franchises and nine pre-owned centers throughout the St. Louis region. Firmly established as Missouri’s largest automotive dealer group prior to the event sponsorship, the 47-year-old company has seen a dramatic increase in the national awareness of their Bommarito.com brand through the INDYCAR platform and the race’s NBC Sports broadcast.

“The INDYCAR event sponsorship at Gateway Motorsports Park has enabled us to deliver our message that ‘Price and Service Sells Cars,’ not only in our home market but on a nationwide level as well,” said Bommarito Automotive Group President John Bommarito. “The efforts of our group, Axalta and Valvoline not only impacted our sales and service efforts, but also our mission of giving back to the St. Louis community. This was the perfect platform for everyone.”

Tickets for the third annual Bommarito Automotive Group 500 presented by Axalta and Valvoline may be purchased by calling the GMP ticket office at (618) 215-8888.

About the Bommarito Automotive Group

Celebrating 47 years in the St. Louis marketplace, the Bommarito Automotive Group (www.bommarito.com) currently operates 20 new car franchises and nine pre-owned centers throughout every St. Louis neighborhood. Bommarito recently was recognized by the St. Louis Business Journal as Missouri’s No. 1 selling automotive group and is currently ranked 52nd in the nation. Our goal is to have at least one Bommarito vehicle in the driveway of every St. Louis family.