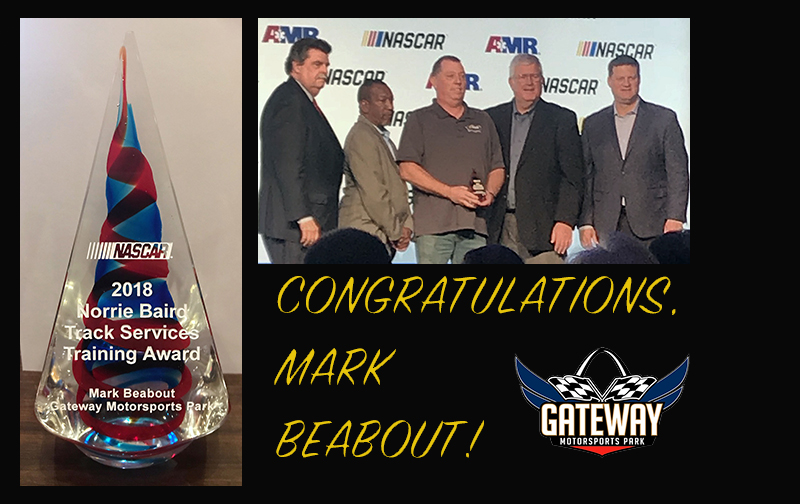 DAYTONA BEACH, Fla. (Jan. 9, 2019) – This week, track services personnel from across the country convened at the 19th annual NASCAR Safety and Operations Summit presented by American Medical Response (AMR) in preparation for the 2019 season.

The event concluded with the presentation of several prestigious awards presented for exemplary efforts in the track services, medical and security fields.

Norrie Baird was a pioneer in the world of motorsports safety and longtime Charlotte Motor Speedway employee. A native of Edinburgh, Scotland and former Pro Rally driver, Baird joined the CMS staff in 1980 as a part-time employee after working with safety teams on the Formula 1 circuit. At that time Baird was responsible for making sure drivers were safely extricated from damaged race cars after accidents. He became a full-time employee when he was named emergency services director in 1991 and implemented new procedures that are now common practices at race tracks nationwide. Under Baird’s watch, CMS became the first track to have a safety team that consisted of a fire and safety crew, the first to have paramedics aboard fire trucks for quick response and the first to require drivers to report to the infield care center after an accident. He also instituted the speedway’s first safety class for area paramedics and created a model for training that many NASCAR tracks have utilized to ensure a safe environment for drivers. His Accident Care Team training classes on driver extrication, on-track firefighting, medical response and vehicle recovery were attended by trackside emergency services personnel from tracks nationwide and around the world. In 2010, Baird was honored by NASCAR with the Excellence in Track Services Award, recognizing an individual who has made significant contributions to the improvement of track services at a single track over the course of a career spanning 10 years or more.

The award winners are as follows: