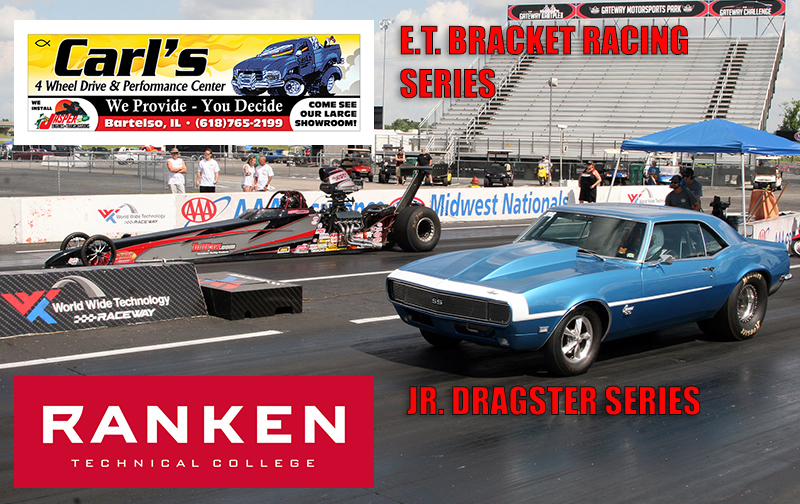 June 6, 2020, St. Louis Region – For the first time in the track’s history, racers in the Carl’s 4WD & Performance ET Bracket Series at World Wide Technology Raceway will be invited to participate in a special event during the AAA Insurance NHRA Midwest Nationals on Friday, October 2, for the King of the Arch Championship Runoff. The top eight (8) racers in the final point standings in each class will be eligible to compete for the Arch title.

“This will be a great way to showcase our local and regional racers in front of a tremendous crowd of NHRA fans in attendance for Friday Night Dynamite. This is a tremendous opportunity to add to the growth and development of our series,” said WWTR Executive Vice President and General Manager Chris Blair. “The top eight in points in Super Pro, Pro, Sportsman and Motorcycle will face off in a special Chicago-style runoff to be named King of the Arch and receive a one-of-a-kind class trophy produced exclusively for this event.”

In addition for an opportunity to win the NHRA Arch title world championship, participants who register to compete to earn points in the six-race Carl’s 4WD & Performance Bracket Series also will be eligible for bonus cash awards at each event – as well as participation in the $100,000 Contingency Connection Racer Rewards program. Racers who earn points will be eligible for weekly, mid-season and end-of season awards as well as contingency prizes for race wins in the Super Pro, Pro and Sportsman classes.