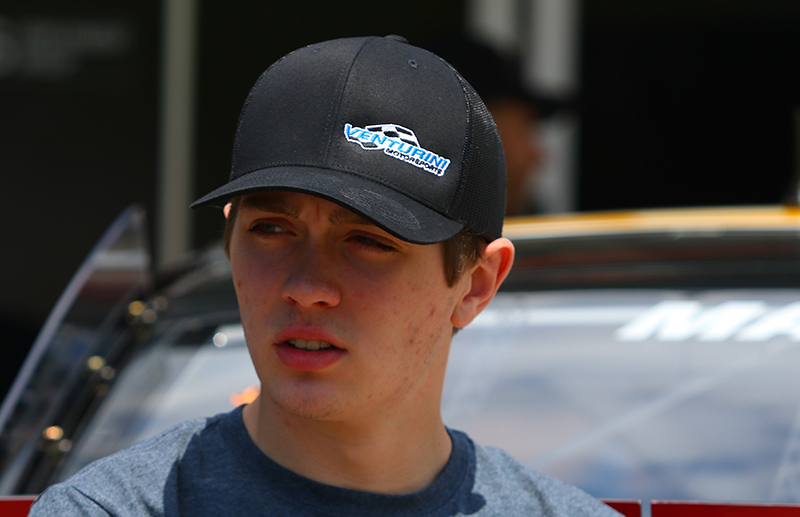 The second half of the 2019 ARCA Menards Series kicks off on Saturday, June 22, with the Day to Day Coffee 150 presented by Lucas Oil at World Wide Technology Raceway in Madison, Illinois. The race, part of a unique doubleheader with the NASCAR Gander Outdoors Truck Series’ CarShield200 presented by CK Power, will take the green flag for 120 laps at 6:30 p.m. CDT that evening.

Between the two series, the day will feature more than three-and-one-half hours of practice, two qualifying sessions, and 350 miles of racing action.

The day’s track activity is scheduled to start at 10:35 a.m. local time and conclude some time around midnight when the Truck Series race sees the checkered flag. Nearly 14 hours of uninterrupted track time will make it a long day for everyone involved. It makes it even longer for drivers doing double duty.

Christian Eckes, driver of the No. 15 JBL Audio Toyota, is scheduled to compete in both series. Currently fourth in the ARCA Menards Series standings with one win in his nine starts this season, Eckes also has made a splash in his limited Truck Series starts over the past season-and-a-half. He made his Truck debut at Iowa last summer and finished eighth, then went to WWTR where he qualified second, won the first stage and led a total of 34 laps before an accident prematurely ended his night. He finished ninth in his other two starts last season at Martinsville and Phoenix. He started from the pole in both the ARCA and Truck season openers at Daytona in 2019, and he picked up his fourth career ARCA win earlier this season at Fairgrounds Speedway Nashville.

Fourteen hours in a passenger car would be tough for anyone, but Eckes is looking forward to the challenge the long day at the challenging St. Louis-area oval will present him.

“It’s one of my favorite race tracks,” Eckes said. “We should have won both of those races last year. It’s going to be a very long day. I didn’t even think about the fact it’s going to be a 14-hour day until right now. I think between the ARCA car and the Truck we should have a chance to win both races.”

Despite his youth — he’s 18 — Eckes has built a record many drivers with years of experience would envy. He won the Myrtle Beach 400 and then followed that with a win in the famed Snowball Derby in 2016. He’s been a part of Dale Earnhardt, Jr.’s Late Model program before making the leap to the Toyota driver development program which has allowed him to race for the Venturini family in the ARCA Menards Series and Kyle Busch Motorsports in the NASCAR Gander Outdoors Truck Series.

Busch has been very outspoken about the performance of his young Gander Trucks drivers this season. While he’s only run one previous race with the team to this point of the season and might not have been fully included in those comments, Eckes wouldn’t shy away from receiving that type of criticism from his owner.

“I think it depends on the person, but for me I would rather hear it up front,” he said. “I don’t know if that works for everybody. We’ve always had a way of coming back after some tough times. I feel like I am good at knowing what I need to do better. You have to be honest with yourself. I appreciate Kyle or whoever it is telling me like it is and pointing me in the right direction.”

That criticism doesn’t necessarily add to the pressure to perform.

Eckes has experienced a trying season to this point. Though one of the preseason favorites to contend for the ARCA Menards Series championship, Eckes missed the third race of the season at Salem Speedway due to an illness the night before the race. Eckes’ health recovered quickly, but his luck didn’t. He was involved in an accident and finished 26th in the next series race at Talladega. Despite giving up nearly two full races worth of points to teammate Michael Self (No. 25 Sinclair Lubricants Toyota), Eckes is just 115 points out of the championship points lead.

Even though he missed that early-season race, Eckes believes he still has a solid chance to win the championship. But in order to do that, he and his Kevin Reed-led team cannot give away any more of those valuable championship points.

“I think we have lacked on some of our opportunities, so I give us a B to this point,” he said, grading his performance to this point of the year. “We haven’t capitalized the way I would have liked to. We’ve had great race cars to this point. We need to start putting full races together. We have great speed and everything we need to go do it. We need to eliminate the failures we have, whether it’s on the car or with the driver. If we can do that we’ll be good.”

Practice for the ARCA Menards Series Day to Day Coffee 150 presented by Lucas Oil at WWTR is scheduled from 11:35 p.m. CDT and 1:30 p.m. CDT. General Tire Pole Qualifying is set for 4:30 p.m. CDT, and the green flag will fall on the 120-lap, 150-mile race at 6:30 p.m. CDT. The race will be televised live on MAVTV. ARCA for Me members may access live timing and scoring, live track updates, and live chat throughout all on-track activities at ARCAracing.com. New users may register for free with a valid email address at ARCAracing.com/login. For ticket information, please call WWTR at (618) 215-8888.

Adult general admission tickets for this one-day doubleheader start at $40. Kids 15 and under are free. Spectator gates will open at 9:30 a.m. The driver autograph session is scheduled for 2:30 p.m. and will be located beneath the main grandstand.

RUMBLE BEFORE THE ROAR PARTY ZONE: WWTR’s new Rumble Before the Roar ultimate pre-race party zone features DJs, the Gateway Girls, special guest appearances, beer Olympics, t-shirt giveaways and entertainment. The party zone opens at 3 p.m. and runs until the green flag is waved for the INDYCAR race.  Admission is only $25 and includes a souvenir mug, complimentary beer and soft drinks and light snacks. The party zone expanse includes WWTR’s all-new cash bar, concession stand and food truck area.  It’s the ultimate way to party with friends before a great night of racing under the lights.   Ticket price increases to $30 at the gate. RBTR is open to adults age 21 and older. Race ticket required for entry.

RIDE TO THE RACETRACK SHUTTLE: WWTR and the St. Clair County Transit District are teaming up to give NASCAR, INDYCAR and NHRA fans a lift to the races. Race fans will receive a round-trip bus ride to WWT Raceway events from the Fairview Heights MetroLink Station for only $5. The shuttle is a cost-effective and convenient alternative for fans travelling to and from WWTR. Buses will run from 3 p.m. to 11 p.m. The $5 ride ticket is cash-only. Buses will depart and return to the Fairview Heights MetroLink Station’s Park-and-Ride Lot at 9200 St. Clair Avenue in Fairview Heights, Illinois. Buses will drop fans off at WWTR’s northwest parking area.

Longtime NASCAR Gander Outdoors Series team owner Mike Mittler passed away on Friday, May 10, following a long and courageous battle with cancer. The respected St. Louis-area race team owner had been involved in racing for more than 50 years and had a hand in the early careers of NASCAR stars Rusty Wallace and Kenny Wallace. In 1995, Mittler launched MB Motorsports and fielded front-running rides for NASCAR stars like Carl Edwards, Jamie McMurray, Brad Keselowski, Justin Allgaier, Regan Smith and Spencer Boyd, to name a few.

To honor Mike, WWTR will name its NASCAR trophy after the local legend. From now on, the annual NASCAR Gander Outdoors Series CarShield 200 presented by CK Power’s trophy will be known as the Mittler Memorial Trophy. The trophy will be presented to the winner of the race by current and former members of the MB Motorsports team and Mittler family members.

The MRN broadcast of the CarShield 200 presented by CK Power will be carried by WBGZ-AM/FM in Alton, Illinois. The station has a clear signal at WWTR and may be tuned in on 1570 AM (stronger signal) or 94.3 FM. The broadcast also may be livestreamed from the station’s website, http://www.wbgzradio.com/.