Chris Atkinson Wins in Dramatic Fashion at ARX of Gateway 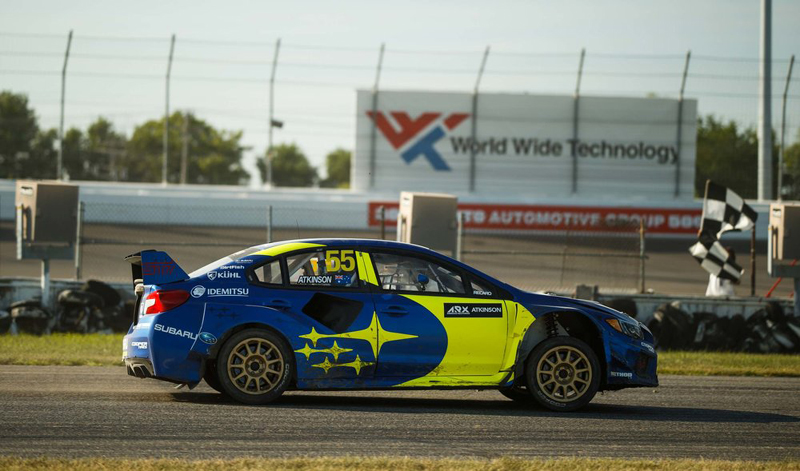 MADISON, Illinois (July 13, 2019) – Australian driver Chris Atkinson won the second round of the 2019 Americas Rallycross (ARX) Championship for Subaru Motorsports USA by making a last corner overtake on the inside of Steve Arpin for the victory at the inaugural ARX of Gateway at World Wide Technology Raceway.

Atkinson won the six-lap final from the back row of the grid, with the hole-shot taken by front row starter, Arpin. The Loenbro Motorsports Canadian driver beat pole-sitter and ARX Championship points leader Scott Speed into the first turn and led the race until the very last corner when he was passed by the No. 55 Subaru WRX STI of Atkinson.

Although Arpin’s Ford Fiesta ST spun across the finish line, he finished second, as Sweden’s Patrik Sandell crossed the line third to take his first ARX podium and the first double-podium in ARX history for Subaru. TQ (top qualifier) driver, Speed, challenged Arpin for the lead on the first lap but dropped back with technical issues and was passed by both of his teammates on Lap 3, but he finished fourth due to problems for Loenbro Motorsports’ Travis PeCoy and Andretti Rallycross’ Tanner Foust.

Former rallycross champion, Foust made a quick launch from the second row of the grid but was spun by contact with Atkinson and retired from the final. The Loenbro Motorsports team had to work flat-out between semi-final two and the final after PeCoy retired on track in the semi from contact at the joker lap merge with Sandell that broke the Fiesta’s steering. He made it onto the final grid with seconds to spare. The other 2019 ARX Supercar freshman, Cabot Bigham, had a race-long battle with Atkinson in the semis but just missed a place in the final.

Reigning ARX2 Champion Conner Martell took the victory in his return to the series with Dreyer & Reinbold Racing. Like Atkinson in the ARX Supercar final, Martell started from the back row of the grid but took his joker lap early, got the hammer down and passed the cars in front of his No. 21 WIX Filters DRR machine when they also took their jokers.

Alex Keyes took the hole-shot at the start to move ahead of pole-sitter Brad DeBerti. The Buhl Sport driver led until he took his joker on the last lap and was passed by Martell, but at the joker exit, he clipped the No. 41 WIX Filters car of JR Hildebrand, which dramatically rolled his car off the circuit. Cole Keatts took the advantage to finish second and Hildebrand recovered to make it a DRR 1-2-3. DirtFish Motorsports’ DeBerti finished fourth and Keyes was classified fifth because Loenbro Motorsports’ Michael Leach had to retire on lap two of his ARX2 debut. Round 2 winner Fraser McConnell spun out of contention in the semi-finals and DRR’s Gray Leadbetter was slowed in her semi-final by a puncture.

Round 3 of the ARX Supercar Championship begins tomorrow at 9:30 a.m. CT with Qualifying Round 1. ARX and ARX2 coverage can be seen live online on Facebook.com/ARXRallycross. Semi-finals and finals coverage kicks off at 2:50 p.m. CT. Event highlights from Round 2 of ARX of Gateway will air on CBS Sports Network on Wednesday, July 17 at 7:00 p.m. CT.

Chris Atkinson (No. 55 Subaru Motorsports USA Subaru WRX STI):
“I said to the team leaving the grid ‘we have nothing to lose, let’s see what happens’. I started off on the front row last time [Round 1 at Mid-Ohio] and finished last; started on the back row this time and finished first. I couldn’t believe it when I came out we were third and I was attacking as hard as I could and I could see Steve [Arpin] up the road and I just kept on charging. For me, I really closed the gap after I landed hard off the jump. I made a big impact and I was right on the edge and I could of gone up the inside but I sat right on his bumper and as he went into the left [Turn 12], his car kicked right and there was a bit of a gap there and I just basically put my door up the inside and got a bit of traction on the inside of the track. It wasn’t a push, I was either sitting back thinking I wouldn’t drive him off the road or do anything, but the door opened and I slid my car up the inside. It’s my first victory and the day we had I thought ‘Why not give it a go in the last corner?’”

Conner Martell (No. 21 WIX Filters Dreyer & Reinbold Racing ARX2):
“We were in the same situation as ‘Atko’ [Chris Atkinson] starting at the back of the grid and all of the sudden, I’m in third and all of the sudden second. We took the lead after Keyes took the joker. It’s not good that he got together with JR [Hildebrand] and rolled, but that’s how it happened and I’m just hoping that we carry this pace on to tomorrow and not have as much bad luck as we did today, but that’s rallycross and it was a lot of fun and that’s what I’m here for.”